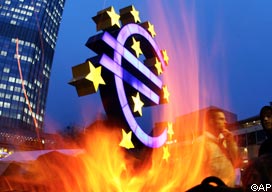 European leaders need to provide “credible and large enough firepower” to halt the sell-off in the eurozone sovereign debt market or they will risk a severe recession, according to the chief economist of the Organisation for Economic Co-operation and Development.

The warning came as the organisation slashed its half-yearly forecasts for growth within the world’s richest countries, and said activity in Europe would grind to a near-halt.

Pier Carlo Padoan said that Europe’s leaders had so far failed to put in place firm plans to address concerns about sovereign debt sustainability, which threaten to destabilise the region’s banking sector and tip it into a severe recession.

“The scenario so far is that Europe’s leaders have been behind the curve”, Mr Padoan said. “We believe this could be very serious.” He said that leaders need to put in place firm plans for fiscal integration.