Interview with Finance Minister Schäuble: 'Germany Does Not Want to Rule Europe' 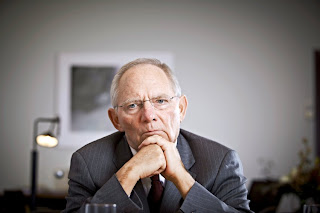 The European Union reached agreement last week on the way forward in the euro crisis. But will it be enough? SPIEGEL spoke with German Finance Minister Wolfgang Schäuble about the deal to cut Greek debt, the dangers posed by Italy and Germany's newly strengthened leadership role in the European Union.

SPIEGEL: Mr. Schäuble, politicians and economists around the world are hailing the recent European Union summit as a success. Has the euro now been saved?

Schäuble: The summit last week moved us forward considerably. But it won't be the last meeting on this issue. It was another important step. This incidentally also appears to be the initial assessment made by the markets.

SPIEGEL: Using market reactions as a guide, one could easily arrive at the conclusion that all problems have been solved.

Schäuble: To repeat what the chancellor has said on this topic on several occasions: There will be no single solution during this process. We are building a new institutional architecture for the euro zone, which will result in more Europe and more stability. We still have a long way to go before all problems are solved, but our chances of success have increased since last week.

SPIEGEL: We are not so sure. If the resolutions are implemented as planned, Greece's debt ratio will only drop to 120 percent of gross domestic product (GDP), which is precisely as high as financially troubled Italy. Do you really believe that this will allow the Greek economy to get back on its feet?

Schäuble: Yes. Debt sustainability is achieved when you have access to the market -- and Italy has that. The troika (eds. note: made up of the International Monetary Fund, the European Central Bank and the European Commission) tells us that this will also be the case for Greece when it has reached this level of debt and improved its competitiveness.