In Europe debt crisis, markets and masses wait for Merkel to blink 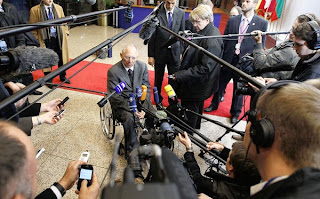 In the white-knuckle game of chicken that the euro crisis has increasingly become, three players are staring one another down: the markets, the masses and Merkel.

As time runs out to save the shared currency and avert global economic pandemonium, the question of who will blink first is likely to become clear over the next few days while European leaders prepare for a crucial summit. All three players are refusing to budge, making it difficult to tell who will yield or whether their intransigence will result in mutually assured destruction.

On Tuesday, finance ministers from the 17 Eurozone countries agreed in Brussels on how to increase the firepower of their bailout fund and on releasing about $11 billion in emergency loans to Greece so that it can avoid bankruptcy. The meeting was a prelude to the leaders' summit next week at which France and Germany are expected to press for rewriting the rule book in order to knit the Eurozone more tightly together, centralizing control over national budgets and finances to ensure that members of the club stick to the rules on debts and deficits.

With time running short and investors scrambling for the exits, European leaders — especially German Chancellor Angela Merkel — are under intense pressure to do more than push for stronger fire safety codes when the building is already in flames.