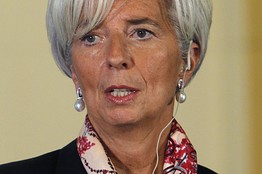 In dire times, few straws get more clutched at than the International Monetary Fund. A report that Italy could secure a €600 billion ($794.4 billion) IMF loan sparked a European equity-market rally Monday, with the Stoxx Europe 600 up 3.75%. But investors seem untroubled over whether the IMF is willing or able to give Italy such support. On both counts, they could be disappointed.

The IMF's total resources, comprised mainly of contributions from its member states, totaled €630 billion at the end of September. But €160 billion of that—including the fund's gold holdings and amounts it is already lending—can't be used for new loans. A further €145 billion is undrawn funds available to countries like Poland that have flexible credit lines with the IMF; the fund also keeps a €45 billion reserve buffer. So in total, the IMF has only around €280 billion available for new lending.

Providing that sum to one country looks unfeasible. Greece's €30 billion borrowing from the IMF was equivalent to 24 times the sum it contributes to the IMF, a record level. On that basis, Italy could borrow €215 billion, according to J.P. Morgan figures. But that would leave the IMF with little capacity to help other countries in need.