Here Comes the Trade of the Decade in Europe 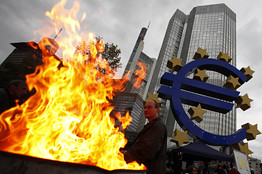 If the euro holds together, shorting German and French 10-year bonds becomes the trade of the decade.

Every lurch Europe has taken toward unity has been accompanied by yield convergence. It happened with the signing of the Maastricht treaty in 1992; yields fell across Europe until the debut of the single currency in January 1999.

Fiscal union — a common euro denominated bond backed by the member nations of the EU — looks like the next step, if the euro is to continue at all. That spells more yield convergence.

Only this time, the convergence will come from rising French and German yields, rather than falling rates in the periphery. If Europe issues a bazooka-sized euro bond of EUR1-2trillion, then yields must rise in order to attract demand.