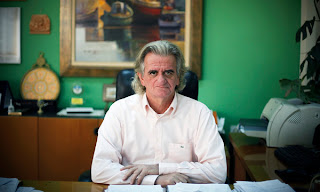 Ioannis Chatzis is 86 and lives in a tiny, single room, surviving on a pension that is just enough to pay for food and care for his bedridden wife.

But in its latest push to raise cash, the Greek government sent him a new $372 real estate tax bill, incorporated into his October electric statement.

Mr. Chatzis says he is being asked to choose between lights and paying for his wife’s medicines, since he cannot afford both on his $720-a-month pension.

“This is how we are treated,” he said recently, his face a mixture of fury and despair. “I have nothing left to give. I will not be paying it.”

Mr. Chatzis is far from alone in that vow, and it is not certain that the Greek government will do anything about the tax rebels.

As the first due dates approach on the Greek government’s novel idea of linking electricity to tax payments, a growing resentment is settling over many parts of this country — one that some local officials believe could even shake its political stability.

More
Posted by Aristides N. Hatzis at 8:12 AM