'Germany As Isolated on Euro as US Was On Iraq' 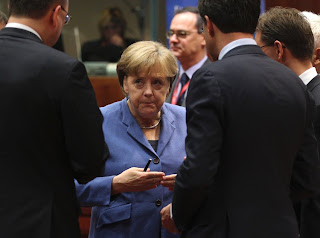 Prophecies of doom are mounting as the euro zone hurtles deeper into crisis, and the world pins its hopes on Germany to solve it. The country has been thrust into a leadership role it has avoided for decades, isolating Berlin from its partners, say commentators. Poland's foreign minister has implored the country to save the euro "for your own sake and for ours."

Market participants and EU politicians are starting to sound more apocalyptic in their warnings about the euro crisis as yet another make-or-break summit, on Dec. 8 and 9, draws near. Meanwhile the pressure on Germany to drop its opposition to euro bonds or a massive intervention in bond markets by the European Central Bank is intensifying by the day.

Polish Foreign Minister Radoslaw Sikorski resorted to dramatic rhetoric on Monday evening when he appealed to Germany to avert the collapse of the euro zone.

"There is nothing inevitable about Europe's decline. But we are standing on the edge of a precipice. This is the scariest moment of my ministerial life but therefore also the most sublime," Radoslaw Sikorski said in a speech in Berlin on Monday evening. "I demand of Germany that, for your own sake and for ours, you help it (the euro zone) survive and prosper. You know full well that nobody else can do it."

"I will probably be the first Polish foreign minister in history to say so, but here it is: I fear German power less than I am beginning to fear German inactivity," he said, referring to the troubled history of relations between the two nations.

So far, though, Germany is resisting calls to allow the European Central Bank to conduct unrestricted purchases of government bonds issued by ailing euro-zone countries in order to push their borrowing costs down to sustainable levels.

It also remains opposed to jointly issued euro bonds. Its arguments are that the measures would remove the incentive on high-debt nations to get their budgets in order, would stoke inflation and would end up costing Germany too much.