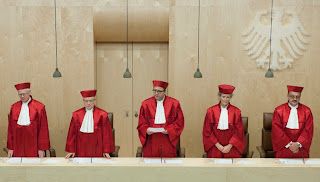 Some see Germany's Federal Constitutional Court as as a guardian of democracy in the euro crisis, others see it as an obstacle to rescuing the currency. Now members of Chancellor Merkel's ruling conservatives want to lessen its power by amending the constitution -- to remove its jurisdiction over European issues.

German Federal Constitutional Court judge Udo Di Fabio only has a few weeks to go before he retires on Dec. 19. The former governor of the western state of Saarland, Peter Müller, was elected as his successor by the Bundesrat, Germany's upper legislative chamber representing the interest of states, last Friday.

But before he leaves, di Fabio, responsible for European issues at Germany's highest court, will have to finalize two sensitive rulings. His panel of judges will deliberate on Tuesday and Wednesday this week on two complaints submitted by the Bundestag, the federal parliament, affecting the relationship between the parliament and the government.

The judges must decide how heavily members of parliament are to be involved when the government once again tries to rescue Europe.

But behind the scenes, much more is at stake: the loss of power of the Constitutional Court in itself. The government and the court are locked in one of their biggest power struggles to date. One judge at the court described it as a "latent constitutional crisis." The government, he said, was trying to free itself of the restraints imposed on it by the constitution, and by the court.

The president of the court, Andreas Vosskühle expressed it a little more cautiously. The perception of his court was at present, he said "ambivalent in parts."

On the one hand, the court had been credited for ensuring that European unity remained on a secure legal and democratic footing, he said. But on the other hand, it "is seen by some as an obstacle in overcoming the current crisis."