Jubilation about the German deal to save the euro could prove short-lived if fresh news of Greek tax evasion gains wider currency. There are more Porsche Cayennes registered in Greece than taxpayers declaring an income of 50,000 euros (£43,800) or more, according to research by Professor Herakles Polemarchakis, former head of the Greek prime minister’s economic department.

While German car workers may take pride in this evidence of their export success, German taxpayers may be less keen to bail out a nation whose population appears to take such a cavalier approach to paying its fiscal dues. Never mind all that macroeconomic talk about deficit distress, many Greeks are still plainly riding high on the hog.

Something can’t be right when the modest city of Larisa, capital of the agricultural region of Thessaly with 250,000 inhabitants, has more Porsches per head of the population than New York or London.

Perhaps the penny – or the euro – is already dropping, because Professor Polemarchakis writes that Larissa “is the talk of the town in Stuttgart, the cradle of the German automobile industry, and, particularly, in the Porsche headquarters there”, since it “tops the list, world-wide, for the per-capita ownership of Porsche Cayennes”. 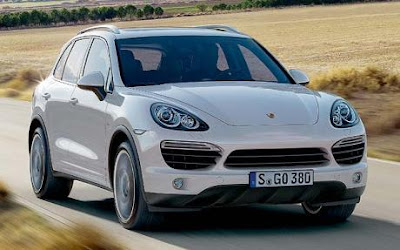 Posted by Yulie Foka-Kavalieraki at 11:56 AM