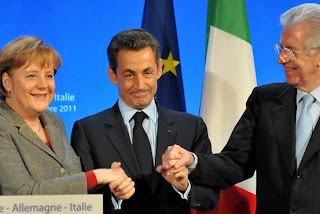 Euro-zone leaders are negotiating a potentially groundbreaking fiscal pact aimed at preventing the currency bloc from fracturing by tethering its members even closer together.

The proposal, which hasn't yet been agreed to, would make budget discipline legally binding and enforceable by European authorities. Officials regard the moves as a first step toward closer fiscal and economic coordination within the currency area. That would mark a seminal shift in the governance of the 17-nation euro zone.

European officials hope a new agreement, which would aim to shrink the excessive public debt that helped spark the crisis, would persuade the European Central Bank to undertake more drastic action to reverse the recent selloff in euro-zone debt markets.

The proposed pact represents the boldest attempt by Europe's leaders to halt the spread of the crisis since they agreed in July to offer Greece a new bailout and to bolster the region's bailout fund. Those steps, initially hailed as a breakthrough, quickly proved insufficient.