The euro zone: Is this really the end? 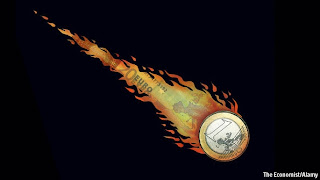 Unless Germany and the ECB move quickly, the single currency’s collapse is looming.

Even as the euro zone hurtles towards a crash, most people are assuming that, in the end, European leaders will do whatever it takes to save the single currency. That is because the consequences of the euro’s destruction are so catastrophic that no sensible policymaker could stand by and let it happen.

A euro break-up would cause a global bust worse even than the one in 2008-09. The world’s most financially integrated region would be ripped apart by defaults, bank failures and the imposition of capital controls (see article). The euro zone could shatter into different pieces, or a large block in the north and a fragmented south. Amid the recriminations and broken treaties after the failure of the European Union’s biggest economic project, wild currency swings between those in the core and those in the periphery would almost certainly bring the single market to a shuddering halt. The survival of the EU itself would be in doubt.

Yet the threat of a disaster does not always stop it from happening. The chances of the euro zone being smashed apart have risen alarmingly, thanks to financial panic, a rapidly weakening economic outlook and pigheaded brinkmanship. The odds of a safe landing are dwindling fast.