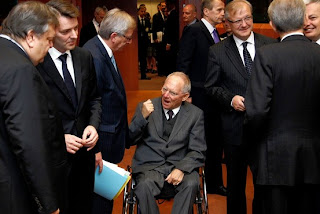 Euro-zone finance ministers agreed on Tuesday on details to expand the bloc's bailout fund but acknowledged it would have less capacity to help troubled nations than once hoped, and suggested future efforts to resolve the worsening crisis would depend on the European Central Bank and the International Monetary Fund coming to their aid.

An analysis presented at the meeting suggested the fund might raise between €500 billion and €750 billion ($700 billion to $1 trillion), according to a person familiar with the matter, far short of the €1 trillion or even €2 trillion that many had expected. After the meeting, officials didn't give a figure for its expected size.

But such sums would fall shy of the amount that would be needed to convince financial markets there is enough in the pot to rescue Italy and Spain, as well as to support Europe's troubled banks.

The rising debt-financing costs of Italy, represented at the meeting by its new prime minister, Mario Monti, were a major concern of the meeting, officials said, adding there were worries about the country's heavy borrowing need of about €400 billion next year.