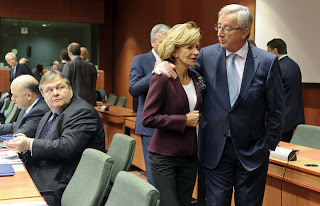 Euro-area finance ministers said they would seek a greater role for the International Monetary Fund in fighting the sovereign debt crisis after conceding the effort to expand their bailout fund missed the target.

The finance chiefs of the 17 nations using the euro agreed to work on boosting the resources of the IMF so it can “cooperate more closely” with the European Financial Stability Facility, Luxembourg’s Jean-Claude Juncker told reporters late yesterday in Brussels after leading the meeting.

“It’s very important that the IMF globally will increase its resources either by raising its capital or by bilateral loans so that it can lend more money to euro-zone countries in need,” Dutch Finance Minister Jan Kees de Jager said in an interview with Bloomberg Television after the meeting. “If we open the IMF effort, that will be sufficient together with the leverage options in the EFSF.”

After a series of stop-gap accords failed to protect Italy and Spain from surging bond yields, Europe is under growing pressure from U.S. leaders and international financial markets to find ways to boost the EFSF’s effectiveness. They agreed on a plan to guarantee up to 30 percent of bond issues from troubled governments and to develop investment vehicles that would boost the facility’s ability to intervene in primary and secondary- bond markets.