EU Summit Paves the Way for a Split Continent 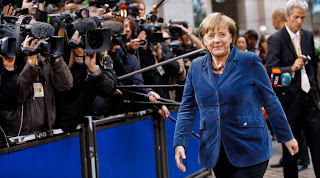 Last Wednesday's summit in Brussels took important steps toward saving the European common currency. But it also made it clear that the European Union is being divided in two. Germany is the new Europe's leader -- for better or worse. By SPIEGEL Staff

At 7:45 p.m., European Council President Herman Van Rompuy could no longer avoid the embarrassing and unpleasant task of throwing out 10 people. Friendliness was called for, of course, and nice words. But so too was firmness: Their presence was no longer required, and they were asked to leave the assembly hall of the Justus Lipsius building in Brussels.

They were all proud people, the sort who usually do the throwing out themselves: national leaders like British Prime Minister David Cameron and Polish Prime Minister Donald Tusk -- all from the 10 countries that are part of the European Union but don't use the euro.

They met last Wednesday with their 17 counterparts from the euro zone to discuss the future of Europe. In reality, though, they complained that the 17 euro-zone nations were embarking on their own path and not involving them sufficiently.

There was no shortage of grievances. Indeed, the full, 27-member session had already taken much longer than planned when Van Rompuy braced himself and asked Cameron, Tusk and the other eight leaders of non-euro-zone nations to leave. He thanked them for the "positive" discussion -- a choice of words which belied the heated atmosphere which characterized the session -- and went about his extremely unpleasant task.

There was a break, and then dinner was served. Now the 17 heads of state and government of the euro zone could finally tackle the important part of the meeting. Over dinner, they discussed how to save the euro. 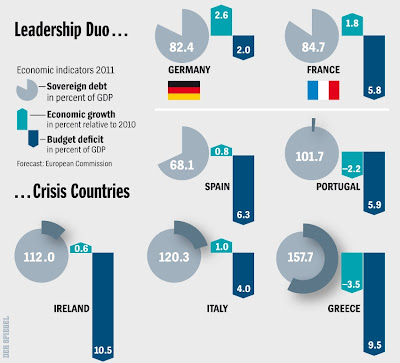 Posted by Yulie Foka-Kavalieraki at 6:30 PM