A Continent Stares into the Abyss

Fear is spreading through the financial markets as investors pull their money out of the crisis-stricken euro-zone countries. With Chancellor Angela Merkel opposed to using the ECB's firepower to solve the crisis, the monetary union appears increasingly in danger of breaking apart. Some economists are even arguing for Germany to reintroduce the deutsche mark. By SPIEGEL Staff

Euro bonds? French President Nicolas Sarkozy apparently isn't familiar with the term. He talks and talks, but he never mentions euro bonds. And then it's Italian Prime Minister Mario Monti's turn. Euro bonds? Never heard of them. Or at least he says nothing about them in his speech. The next speaker is German Chancellor Angela Merkel, who wouldn't dream of mentioning euro bonds.

It is last Thursday, and the three European leaders have just had lunch together in Strasbourg and are giving a press conference on the subject of the euro. It must have been an amazing lunch, full of unity, harmony and understanding.

Or at least that's the way they describe it. And when something is that pleasant, it makes complete sense not to talk about euro bonds, even though they are now the central issue in the debate over the euro crisis. Merkel is opposed to the idea and Sarkozy and Monti are in favor, but they don't want to say as much.

Of course, there is, as always, a journalist around who is leery of the harmonious mood, which is why he asks about the bonds that everyone knows about but isn't mentioning. Merkel says that she hasn't changed her opinion on the issue, but without actually uttering the distasteful words. Sarkozy mentions the Rhine River, tells a joke about a hypochondriac, talks and talks and finally says that he and his counterparts will certainly come to an agreement. But he doesn't mention euro bonds by name.

And then it's Monti's turn again, and what does he do? He does use the word euro bonds, but then he quickly switches to a new, more attractive synonym, noting that he would not be overly opposed to "stability bonds." His words reveal that there is indeed a serious conflict within the euro zone. 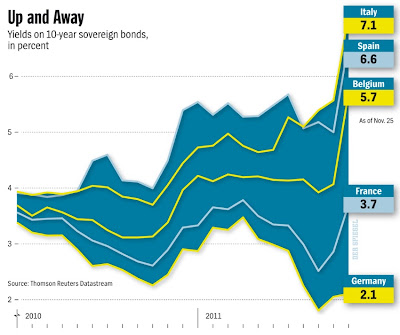 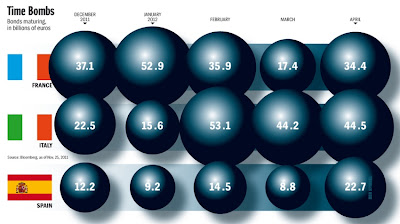