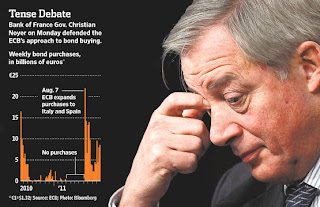 The European Central Bank has showed no sign of abandoning its conservative approach to buying government bonds in recent days, keeping the pressure on euro-zone governments to take the lead in stemming the region's debt crisis.

Euro-zone governments are privately—and sometimes publicly—clamoring for the ECB to intervene massively in financial markets and stop the rise in some governments' borrowing costs to ruinous levels. But bank officials gave no hint Monday of an imminent escalation of its limited bond purchases, despite heightened fears that time is running out for the euro zone to avoid a meltdown of its sovereign debt markets that could tear Europe's single currency apart.

The central bank purchased €8.6 billion ($11.5 billion) in bonds last week, the largest amount in three weeks but well below what many policy makers say is necessary to calm markets.

"The ECB should buy bonds and set a limit to yields, or a floor to bond value, so that markets know there's a counterparty ready to trade at that level," said Pier Carlo Padoan, chief economist of the Organization for Economic Cooperation and Development.