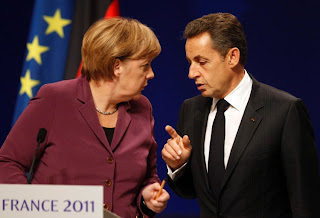 The move would divide Europe -- according to a press report, Germany and the five other strongest euro member nations are considering the issue of so-called "elite bonds." A German government official has denied the report, but there is mounting speculation that the six nations plan to spearhead closer fiscal coordination.

German Chancellor Angela Merkel has been vehemently opposing calls for the introduction of joint bonds issued by all euro-zone member states to fight the ongoing currency union debt crisis. But according to a Monday report in the conservative paper Die Welt, her government has been secretly working on an alternative: the issue of so-called "elite bonds" by the six euro-zone member states that enjoy a top, AAA credit rating.

The newspaper, citing unnamed senior European Union diplomats, said Germany was considering jointly issuing bonds with France, Finland, the Netherlands, Luxembourg and Austria, and that the bonds would have yields of around 2 to 2.5 percent, slightly higher than the current yield on 10-year German government debt.

The idea has been under discussion for several weeks, and was addressed most recently last Friday in Berlin at a meeting of the finance ministers of Germany, Finland and the Netherlands, the newspaper said.

The aim of the bonds would not just be to stabilize the AAA countries but also to raise funds to aid struggling nations such as Italy and Spain, provided that those countries met strict conditions in return.

The German government's Finance Agency, which manages the issuance of German government debt, could play a central role in the plans for elite bonds, Die Welt reported. A German Finance Ministry spokesman denied the report on Monday, Reuters reported.

Last week, European Commission President José Manuel Barroso presented three possible models for euro bonds to be issued by all 17 euro-zone members, but Merkel rejected the plans. She fears they would lead to a sharp rise in German borrowing costs and argues they would reduce the pressure on highly-indebted euro-zone nations to get their finances in order.