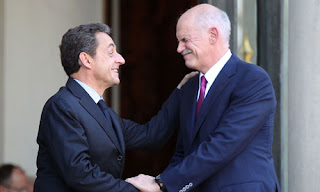 French president Nicolas Sarkozy is to hold urgent talks in Germany with chancellor Angela Merkel on speeding up the rescue plan for the euro.

Sarkozy said on Friday the talks would take place within days as uncertainty about the eurozone's stability and worries about deepening recession returned to European markets.

Declaring after talks with Greek premier George Papandreou that "a failure of Greece would be a failure for all of Europe", the French president praised Athens for its determination to meet its commitments and said: "There can be no question of dropping Greece."

His comments came as European leaders turned up the heat on Slovakia to approve the enhanced eurozone rescue fund amid growing fears it could yet scupper the scheme.