No big bazooka: Europe’s leaders have agreed on how to prop up the euro. For now 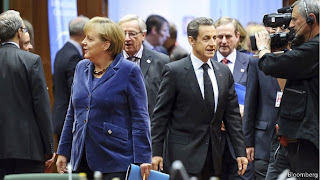 It was four in the morning in the Justus Lipsius building in Brussels when word at last filtered out that, after nearly ten hours of arduous bargaining, the euro zone’s leaders had reached the long-promised “comprehensive” deal to save the euro. Diplomats called contacts in the sanctum to find out what, precisely, had been agreed. “We think we have an agreement, but we are not sure what it is,” came the reply from one weary negotiator.

By their own admission, the leaders themselves at times struggled to understand the complex financial engineering which they were being asked to approve to turn their inadequate financial slingshot into the “big bazooka” that the world had asked them to assemble. But by dawn on October 27th they could proudly announce a “comprehensive set of additional measures reflecting our strong determination to do whatever is required to overcome the present difficulties”.

The result was better than some had dared hope. Just a week earlier the summitry had seemed doomed, with Angela Merkel, the German chancellor (left above), rejecting a push by Nicolas Sarkozy, France’s president (right above), to boost the euro zone’s bail-out fund by allowing it to borrow money from the European Central Bank (ECB). Unable to cancel a summit planned for October 23rd, the leaders decided instead to call a second one three days later. The ruse worked; the discussions, said one participant, had gone “from worse to bad to better”. Markets rejoiced.