'Maybe We Are Ruining the World' 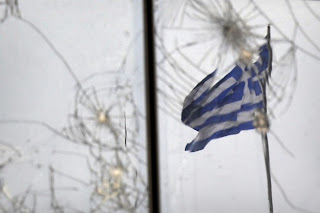 My Uncle Thanassis is 81 years old. Over the course of his long life, he has weathered every Greek identity crisis since World War II: the bitterness that divided and impoverished the country after its bloody 1946-1949 civil war between communists and conservatives. The painful postwar years that sent his friends to Australia and the United States for work. The 1967-1974 military junta that smothered free expression and movement. The rise in the 1980s of the populist socialism pushed by former premier Andreas Papandreou, a mercurial, Harvard-educated economist. The good-time 1990s, when even the souvlaki-shop owners in Athens seemed to be making enough money to buy new Alfa Romeos and island vacation homes. The Europeanization of the last decade, when espresso freddos replaced the traditional sweet, grainy coffees in cafes -- and when a white-haired man who wore three-piece suits and liked dancing to wailing clarinet music seemed hopelessly out of place.

Through it all, my uncle maintained that being Greek was a gift. "Greeks make people feel good," he used to say, his eyes twinkling. "We show people how to live in the moment, to appreciate the scent of lemons and jasmine in the summer, to dance instead of cry when the stress of life gets to be too much. Whatever is wrong with this country, we always have that."

Not anymore. When I recently stopped for an afternoon coffee at his little house in a crowded Athens neighborhood, his eyes were no longer twinkling. Like many Greeks, he is paying higher taxes and higher utility bills on a reduced pension. He is distressed to see that his once-homey neighborhood, where he has lived for 50 years, has become a run-down warren filled with empty shops and scarred by graffiti. By dusk, the main drag where he buys his feta cheese and Italian salami is now filled with forlorn Nigerian prostitutes as young as his teenage granddaughter. A few weeks ago, when he was walking home after a midday trip to the grocery store, he stopped to talk to a young Greek couple who claimed to be lost. When he got home, he realized they had picked his pockets clean of cash.

"Is this what it's come to?" he said, as downhearted as I'd ever seen him. "Stealing from each other in broad daylight and under the guise of the friendliness that has made us who we are?" He sipped his coffee and turned on the TV news, which was blaring yet another BBC report about how the Greek economy is ruining the world. "Maybe they're right," he sighed. "Maybe we are ruining the world."

More
Posted by Yulie Foka-Kavalieraki at 10:53 AM