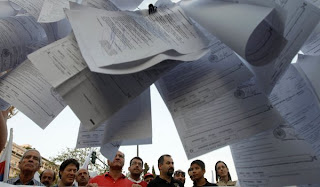 It has happened time and again in recent months as Europe’s debt crisis has played out. Stocks stage a strong comeback on expectations that a solution has been found. Then they quickly resume their decline as hopes dissipate, leaving investors puzzled and frazzled.

What is going on?

The problem, say close watchers of both the subprime financial crisis in 2008 and the European government debt crisis today, is that many investors think there is a quick and easy fix, if only government officials can agree and act decisively.

In reality, one might not exist. A best case in Europe is a bailout of troubled governments and their banks that keeps the financial system from experiencing a major shock and sending economies worldwide into recession.

Posted by Yulie Foka-Kavalieraki at 9:30 AM