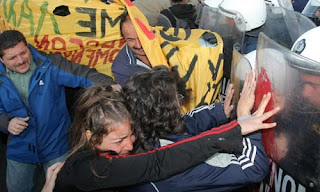 The Greek authorities are bracing for a broader campaign of civil disobedience as a nation infuriated by austerity and incensed at the engagement of EU and IMF "monitors" takes matters into its own hands.

Sales of generators have shot up as households, resisting further belt-tightening, have sought to bypass a new property tax that the beleaguered government will collect through electricity bills.

Announcing the measure in a desperate attempt to plug a budget black hole, the finance ministry warned that failure to pay the tax would automatically result in power supplies being disconnected.

"But when 70% of Greek households don't pay it what are they going to do, cut off the whole lot?" asked Giorgos Zisimos, a shopowner-cum-driver.