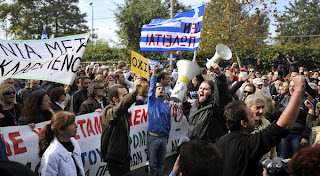 Every Oct. 28 Greece celebrates “Oxi Day,” or “ ‘No’ Day,” a national holiday commemorating Greek resistance to the Axis powers during World War II. On Friday, those celebrations took on a greater weight. As Greeks suffer from harsh austerity measures, there is growing popular sentiment here that the country has ceded key parts of its sovereignty, and its pride, to its foreign lenders.

Here in Greece, anger is running so high — especially toward Germany, whose Nazi occupation still leaves deep scars here and who now dominates the European Union’s bailout of debt-ridden Greece — that National Day celebrations were called off on Friday in the northern city of Thessaloniki for the first time ever after crowds shouted “traitor” to the Greek president, Karolos Papoulias.

“I was the one fighting the Germans,” Mr. Papoulias, 82, said on national television. “I am sorry for those who cursed at me. They should be ashamed of themselves. We fought for Greece. I was an insurgent from the age of 15. I fought the Nazis and the Germans, and now they call me a traitor?”