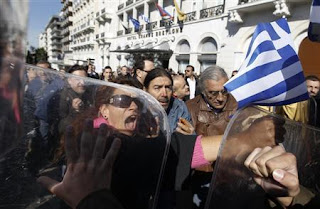 The protest in Thessaloniki was echoed at smaller parades across Greece, including in Athens where marchers held black ribbons. It showed the extent of anger at the higher taxes and wage cuts sought by the European Union and the International Monetary Fund in return for funds to avert a debt default.

The annual military parade in the northern city is one of the most symbolic events in Greece's political calendar and commemorates the rejection of Italy's ultimatum to surrender in 1940. It was the first time it had been canceled.

"The Greek people are now fighting a major battle. They also fought one many years ago today ... We must unite to overcome this crisis," Papoulias said, adding that he had fought the Germans as a 15-year-old boy. "So who is a traitor? They should be ashamed!"

"I came to honor this historic city. There are some who want to prevent this celebration. I am very sorry," said Papoulias, 82, appealing to Greeks to stand together in the face of the country's economic plight.