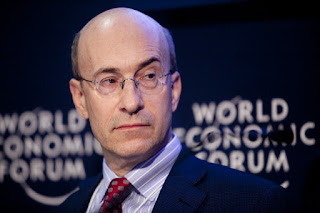 European leaders’ agreement to expand a bailout fund to stem the region’s debt crisis only buys time as Greece will likely still leave the euro in the next decade, Harvard University economist Kenneth Rogoff said.

“It feels at its root to me like more of the same, where they’ve figured how to buy a couple of months,” Rogoff said as a compensated speaker at the Bloomberg FX11 Summit in New York yesterday. “It’s pretty darn clear the euro does not work, that it’s not a stable equilibrium.”

European leaders bolstered their crisis-fighting toolbox by boosting the heft of their rescue fund to 1 trillion euros ($1.4 trillion) and persuading bondholders to take 50 percent losses on Greek debt. Measures also included a recapitalization of European banks and a potentially bigger role for the International Monetary Fund in strengthening the bailout fund.

Stocks surged after the agreement, extending the biggest monthly rally for the Standard & Poor’s 500 Index since 1974. Treasuries sank, while the euro strengthened and metals and oil led a rally in commodities.

“My read of this is that the markets are cheered that they’re still alive,” said Rogoff, 58, a former International Monetary Fund chief economist. “Even in a fairly short period, doubts will start to grow again.”

See here and here
Posted by Yulie Foka-Kavalieraki at 1:54 AM