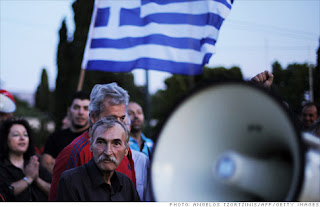 That seems to be the general consensus among investors, economists and academics.

Even though global financial markets showed some resilience this week, the tone remains cautious as the underlying problems haven't changed.

"There is no way to avoid pain for Greece," said Holger Schmieding, chief economist at Berenberg Bank. "The austerity is painful. Further painful structural reforms are on their way."

There are essentially two options: Greece can continue to cut spending and raise taxes in a painful attempt to convince creditors that it can change its ways. Or, the country can admit defeat, default on its debts, and hope for the best.

Euro area leaders have said repeatedly that a default is off the table, arguing that such an outcome would have severe and unknowable consequences for the euro currency and the global financial system.

But there is also a growing recognition that the status quo is not working.