Gauging the Fallout of Another Rescue 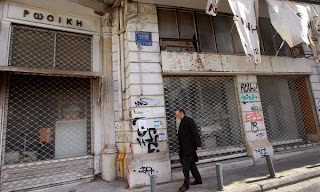 Another European plan to fix its sovereign debt problem has initiated another sharp market rally. But will the enthusiasm over the latest rescue effort last longer than the optimism that greeted past plans, only to slowly fade away?

The market’s quick embrace of the latest effort to tackle Greece’s mammoth debt burden and restore confidence in the Continent’s banks reflected hope that this plan was broader and more robust than previous ones.

“It’s not a silver bullet, but it makes things manageable to some extent,” said Gilles Moec, co-head of economic research for Deutsche Bank. Though vague on details, others said, it is clearly a step in the right direction after many missteps.

But skeptics quickly emerged, saying some of the main elements of the plan may not be as good as they looked initially, starting with whether it will truly deliver as much debt relief to Greece as promised, and whether it is sufficient to buttress potentially troubled banks.

More
Posted by Aristides N. Hatzis at 8:40 AM