For Ordinary Greeks, Big Bailout Adds Up to Years of Hardship 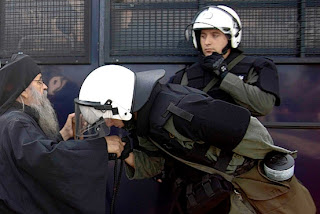 In the fading light of a fall evening, Amarillis Visvardis waits for the day's first customer at her clothing store in this city's tony Kolonaki district. She passes the time reading a novel set in 1930s China. No one comes.

Across town, in a neighborhood scarred by drugs, a free health clinic that serves needy illegal immigrants has plenty of clients. Doctors notice something unusual about them: Many are Greeks.

Greece was promised a heap of debt relief at this week's summit of European leaders. But there is little that looks like salvation. The debt crisis has spurred searing austerity measures that will continue for years, and are likely to prolong the country's recession. Bit by bit, Greek society is being stretched, and it is popping at the seams. 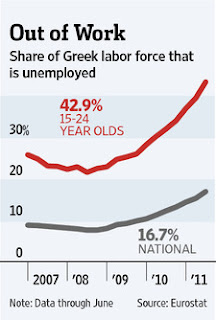 The small businesses that form the core of the Greek economy—and the bedrock of the Greek middle class—are closing. The poor are becoming poorer. The fiery street protests are turning nastier. Friday, demonstrators in Thessaloniki, Greece's second city, blocked an annual military parade and jeered the Greek president, who left the scene.

"There is a feeling that things can only get worse, that we will have to live with half the money we had," says Spiros Papadopoulos, a young blogger. "What is at stake is our quality of life, and, for some, their subsistence."

Greece is the canary in the euro zone's coal mine. The bloc's prescription for a crisis spurred by overborrowing and overspending is a dose of radical fiscal rectitude, delivered fast. To regain the confidence of skittish investors, countries are being asked to rip up paternalistic policies that provided stability and comfort to legions of citizens but left the state reeling from the bill. The question is, can it be done without igniting society into revolt?

The outcome will reverberate beyond Greece's borders. A societal collapse would further distance Greece from other countries in the European Union, threatening to unravel Europe's grand postwar project of an ever-closer federation. 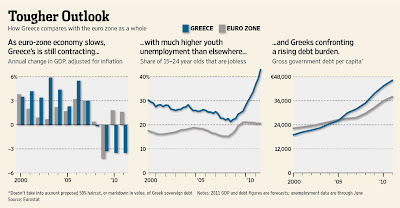 Posted by Yulie Foka-Kavalieraki at 9:14 AM

Greece should return to growth in 2014, Mr. Reichenbach (Head of the EU Task Force in Greece) said. Perhaps that made some people feel good. Excuse me; feel good?

Another at least 2 years of economic decline? Put differently: another at least 24 months of a development which has already tested social peace quite noticeably every month? By the way, growth after 5 years of decline is not growth; it is only the beginning of getting back to where one already was before.

Now if that is not a final call that something needs to be done urgently to revive a dead economy, then I don’t know what is. Or does anyone really believe that social peace can survive another 24 months the experiences of the last 24 months?

A well-known international consulting firm published a report which suggests how 500.000 new jobs could be created over the next 10 years. Over 100 specific projects are identified. What should be done?

Well, first of all – read the report! Secondly, take the first 10 projects, implement them in 2012 and create 50.000 new jobs next year. Any further questions?

Any investor will invest in Greece if he is offered an interesting project, a security for his investment and a competitive business framework. Can this be done quickly in the whole country?

No, it cannot! But it could be done very quickly in selected parts of the country. The Chinese didn’t want to throw out communism but they also saw that without some capitalism they would never get their feet on the ground. So they started with selected Free Trade Zones. Why not learn a bit from the Chinese?

So the recipe is quite simple: take the first 10 projects for 2012; structure them professionally and invite bids from investors; define zones where investors are offered all the security, economic framework and profit potential which they desire --- and get started!