Everyone Bails Out Everyone 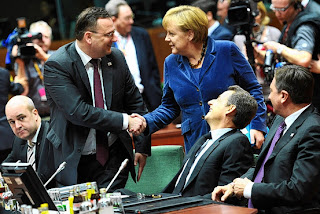 Is anyone surprised at what Europe wrought? Contrary to headlines, European policy makers did not leave Brussels yesterday morning with the "final, even groundbreaking" plan to end the euro-zone's debt crises that they had promised earlier in the week. Details are still sketchy on many of the announced measures, including those to increase the firepower of the European Union bailout fund and prop up the continent's banks. Remaining disagreements are serious, and that means we're far from through with euro-crisis summitry.

What the summit does highlight, however, is that Europe's piecemeal approach is not going to cohere into a real or lasting solution if policy makers continue to ignore the underlying economic anemia that has afflicted the economies of Europe for decades. The patient has risen from his bed and not fallen down. This is one definition of progress.

Thursday's deal offers the sort of grab-bag familiar in Brussels. Greece gets another package of bailout loans, totaling €130 billion in value. Various parts of the EU's bailout machinery will be tweaked or boosted. But let's climb across the deal plank by thin plank.

More
Posted by Yulie Foka-Kavalieraki at 9:54 AM