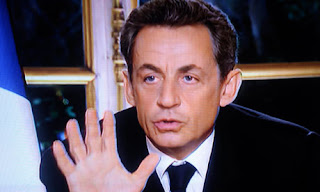 Nicolas Sarkozy threatened to take the shine off a day of jubilation in financial markets at a deal to rescue the eurozone, when he said it had been an "error" to allow Greece to join the euro a decade ago.

Amid more protest on the streets in Athens, the French president tried to convince the public to back reforms intended to maintain Greece's membership of the single currency. "It was an error because Greece entered with false [economic] figures … it was not ready," he said.

Sarkozy told French TV: "We had to face up to all this. If the euro had exploded on Wednesday night, all of Europe would have exploded. If Greece had defaulted, there would have been a domino effect carrying everyone away ... we took important decisions that avoided catastrophe."

His remarks underline the continuing frailities of the eurozone, and illustrates the task Europe's leaders have in trying to hold the currency together.