Europe Tries to Lure Chinese Cash to Back Rescue of Euro 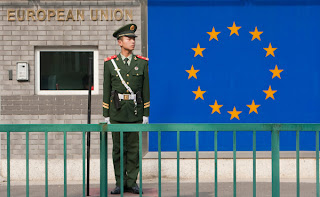 A day after European leaders unveiled their latest plan to save the euro, top officials opened talks with China in an effort to lure tens of billions of dollars in additional cash, giving China perhaps its biggest opportunity yet to exercise financial clout in the Western world.

China is expected to demand significant concessions, including financial guarantees and limits on what Beijing sees as discriminatory trade policies, in exchange for any investment in Europe’s emergency stability fund. The head of the rescue fund, Klaus Regling, got a cautious reply from Chinese officials Friday during a visit to Beijing, where he said he did not expect to reach an investment deal with China anytime soon.

A senior Chinese official, Vice Finance Minister Zhu Guangyao, said China — like the rest of the world — was still waiting for the Europeans to deliver crucial details on how the rescue fund, the European Financial Stability Facility, would operate and be profitable before deciding on whether to participate.

That Europe would turn so openly to China to help stabilize the debt crisis shows how quickly the Chinese economic juggernaut has risen on the world stage. Indeed, if China comes to Europe’s aid, it will signal a new international order, with China beginning to rival the role long played by the United States as the world’s pivotal financial power.

“This would be a tectonic shift,” said Pieter P. Bottelier, an expert on China who teaches at the School of Advanced International Studies at Johns Hopkins University. “It would be so important economically and politically.”