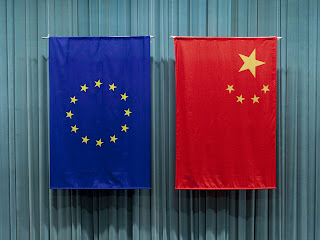 European officials are studying the idea of an International Monetary Fund channel for money for their enlarged rescue fund, as China said it needed more detail on any potential plan before deciding whether to contribute.

The European Financial Stability Facility may explore setting up a special purpose vehicle with the IMF, Klaus Regling, the EFSF’s chief executive officer, said at a briefing in Beijing today. Separately, Chinese Vice Finance Minister Zhu Guangyao said his government wants to hear about particulars such as the extent of loan guarantees to countries including Italy, and how the senior-debt portion would be structured.

European leaders aim to tap China, holder of the world’s largest foreign-exchange reserves, for help after moving yesterday to contain the crisis by writing down Greek debt and targeting an expansion of the EFSF to about $1.4 trillion. China may seek to increase its influence at the IMF, a global lender of last resort, as a quid pro quo for contributing, said Tomo Kinoshita, an economist at Nomura Holdings Inc.

It may suit China “to contribute to European and global financial stability by injecting funds through an IMF channel,” said Kinoshita, deputy head of Asia economics research at Nomura in Hong Kong. The nation would “try its best politically” to benefit, he added.

More
Posted by Yulie Foka-Kavalieraki at 10:51 AM