Europe Gets a Not-So-Grand Plan 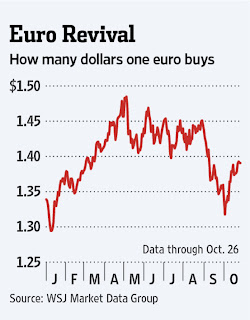 Well, it's a plan. That alone will come as a relief to markets given how low expectations had fallen. But it falls far short of the "comprehensive plan" that euro-zone leaders had promised and investors had been demanding. On all three main measures—restoring Greek debt sustainability, increasing the size of the bailout plan and recapitalizing the banks—key details remain to be worked out. Previous Grand Plans unraveled within days under the glare of market scrutiny; the best hope is that this deal buys a little more time.

The only significant new element to emerge from Wednesday's euro-zone summit was the decision to ask Greek private-sector bondholders to accept a 50% haircut on their exposures. The euro zone believes this can be achieved on a voluntary basis, thereby avoiding triggering credit-default swaps. But the deal will still leave Greece with debt equivalent to 120% of gross domestic product by 2020—far above what many would consider sustainable. That will inevitably fuel concerns that the Greek debt saga still isn't over.

There was even less detail on boosting the European Financial Stability Facility. The bailout fund will operate as an insurer, guaranteeing the first loss on sovereign bonds and could also provide seed capital to "Special Purpose Investment Vehicles" topped up with funding from other public and private investors. But the market is skeptical the former will work while the latter depends on foreign governments such as China agreeing to invest. It's not clear how much extra firepower these arrangements might provide.