EU May Struggle to Keep Euphoria as Post-Summit Scrutiny Deepens 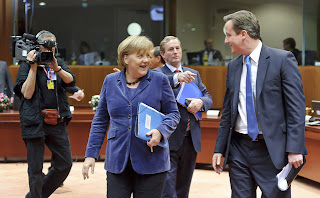 European leaders may struggle to maintain the euphoria that drove the euro to its biggest one-day gain in more than a year as scrutiny deepens on their latest attempt to stem the region’s turmoil.

European Central Bank President Jean-Claude Trichet called for “swift implementation” if financial stability is to be restored, Germany’s Bild Zeitung reported in an extract of an interview to be published tomorrow.

The weaknesses of Europe’s common currency area, ranging from its design to a persisting dearth of bank funding and anemic economic growth, weren’t properly addressed in this week’s accord to stem investor panic, said Harvard University economist Kenneth Rogoff and Jonathan Loynes at Capital Economics Ltd. in London.

“My read of this is that the markets are cheered that they’re still alive,” Rogoff, a former International Monetary Fund chief economist, said as a compensated speaker at the Bloomberg FX11 Summit in New York Oct. 27. “Even in a fairly short period, doubts will start to grow again.”

Ten hours of bargaining by European leaders at the 14th crisis summit in 21 months culminated in an early-morning agreement Oct. 27 to bolster the region’s crisis-combat toolbox by boosting their rescue fund to 1 trillion euros ($1.4 trillion) and persuading bondholders to take 50 percent losses on Greek debt. Measures also included a recapitalization of European banks and a potentially bigger role for the International Monetary Fund.