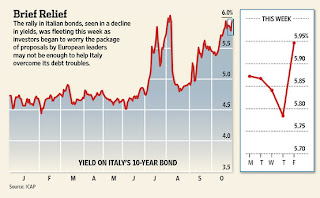 Initial relief over Europe's latest attempt to end its debt crisis faded on Friday as investors fretted about the plan's lack of detail and grew more skeptical about Italy's turnaround effort.

One day after European leaders announced a series of measures aimed in part at enticing investors back to the region's debt markets, bond buyers demanded higher yields on Italian and Spanish debt. An auction of new Italian bonds was met with weak demand, forcing the nation to pay higher interest rates than in previous sales.

The wan response from bond markets underscores how challenging it will be for European leaders to convince financial markets that Thursday's broad agreement is sweeping enough to enable troubled countries such as Italy and Spain to work their way out from mountains of debt. The plan calls for beefing up the region's bailout fund, recapitalizing banks and reducing Greece's debt burden.