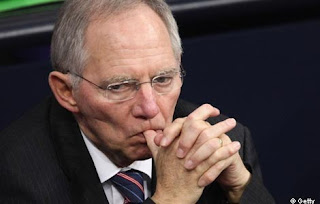 For Wolfgang Schäuble, Germany’s hugely experienced and passionately pro-European finance minister, the financial crisis in the eurozone is not just a threat, but an opportunity.

He believes that the pressure of the financial markets will force the most debt-laden members of the 17-nation currency union to curb their budget deficits and increase their competitiveness. It will also drive them to take the next big steps towards a “fiscal union” to underpin their monetary union.

Last week’s EU and eurozone summits saw agreement on setting up continuous surveillance of Greece’s austerity programme by the European Commission, the European Central Bank and the International Monetary Fund. It also called on the Commission to monitor the reform programme in Italy, the country with the largest debt in the eurozone – although Rome has not asked for any rescue programme.

More
Posted by Yulie Foka-Kavalieraki at 1:04 AM