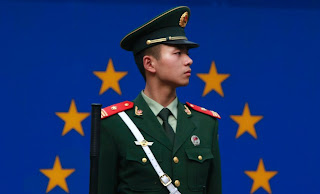 One day after European leaders announced a plan to boost their euro backstop fund to 1 trillion euros, China indicated it may attach conditions to any money it invests. One of those stipulations -- that Europe stop criticizing Beijing's monetary policy -- could strain trans-Atlantic relations.

It didn't take long for French President Nicolas Sarkozy to begin looking for investors in the newly designed euro backstop fund. Just hours after euro-zone leaders announced that they had agreed on a plan to boost the impact of the European Financial Stability Fund (EFSF) to €1 trillion ($1.4 trillion) on Thursday morning, Sarkozy telephoned with Chinese President Hu Jintao to discuss his country's involvement.

While nothing concrete resulted from the chat, there are indications on Friday that any Chinese involvement could come at a price. According to a front-page story in the Financial Times, China would not only require water-tight guarantees on its investment, but Europe might have to pay a political price as well.

As a condition for its involvement, Beijing could ask European leaders to cease criticizing China's policy of keeping its currency, the renminbi, artificially undervalued, Li Daokui, a member of China's central bank monetary policy committee, told the paper. It is an issue that has repeatedly strained China's relations with Europe, but especially with the United States. Were Europe to agree to such a demand, it could drive a wedge between Washington and Brussels.

"It is in China's long-term and intrinsic interest to help Europe because they are our biggest trading partner," Li told the Financial Times. "But ... the last thing China wants to do is throw away the country's wealth and be seen as just a source of dumb money."