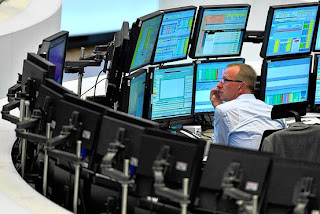 Europe's new strategy to tame its debt woes invigorated global financial markets despite lingering questions over how the plan will work and whether it will be enough to end the two-year-old crisis.

The Dow Jones Industrial Average rose 339.51 points Thursday, or 2.9%, to 12208.55. With the Dow up 11.9% so far in October, it's on track for its biggest monthly percentage gain in nearly 25 years. The U.S. gains followed a surge in stocks across Europe. Investors also piled into commodities and junk bonds. The euro surged 2% to $1.4188, its highest point since early September, after details of the plan were disclosed.

European leaders, meeting through the night in Brussels into early Thursday, brokered a broad package of measures to retool their bailout fund, recapitalize the Continent's banks and reduce Greece's debt load. The deal marks the boldest attempt by Europe's leaders to bring a crisis that began in Greece in the fall of 2009 under control.

Europe's leaders offered few details, however, signaling that it would take weeks, if not months, to work out the fine print. The dearth of detail and uncertainty about when the plan will be implemented left many economists warning the market's reaction could be temporary.