Can Super Mario Save the Day for Europe? 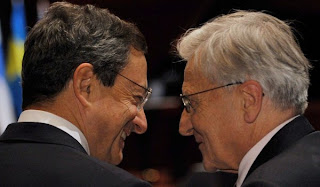 The occasion was a gala at the Old Opera House here in honor of Jean-Claude Trichet, the most powerful central banker in Europe. But in some ways, the evening belonged as much to Mr. Draghi, the Italian who will succeed Mr. Trichet on Tuesday as the president of the European Central Bank in the midst of an economic maelstrom that threatens to tear apart the euro, if not Europe itself.

European leaders took a step toward resolving the crisis last Thursday, with an agreement from banks to take a 50 percent loss on the face value of their Greek debt. Far from heralding an end to the problems, however, the plan ushered in a crucial new phrase in the battle to avert financial disaster.

But despite the challenges awaiting him, Mr. Draghi was in fine form that night earlier this month. Over here, he chatted quietly with Angela Merkel, the chancellor of Germany and a main ally. Over there, he met with Christine LaGarde, the managing director of the International Monetary Fund. And everywhere, Mr. Draghi vowed that there would be no surprises on his watch.

More
Posted by Yulie Foka-Kavalieraki at 9:30 AM