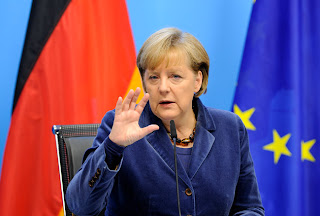 In the end, it was Chancellor Angela Merkel of Germany and President Nicolas Sarkozy of France against the European banking establishment — and the bankers blinked.

It was approaching 2 a.m. Thursday, not long before the Asian markets would open, and the two leaders were desperately trying to nail down the last component of a complex deal to save the euro: forcing the banks to pay a greater share of Greece’s effective default.

For hours, negotiators had been trying to persuade the banks to accede to a “voluntary” 50 percent loss in the face value of their Greek bond holdings. The banks, which had already agreed to a 21 percent write-down, had dug in their heels.

They knew how badly the European leaders needed a deal, and how much financial experts feared a disorderly, involuntary default. That could set off a “credit event,” throwing world financial markets into turmoil, much as the collapse of Lehman Brothers did in the fall of 2008.

But Mrs. Merkel called the bankers’ bluff, said officials present at the discussions. Accept the 50 percent write-down, she told the bankers, or bear the consequences of default. In effect, she was willing to risk a credit event, and to place the blame for any fallout on them.

More
Posted by Aristides N. Hatzis at 8:37 AM