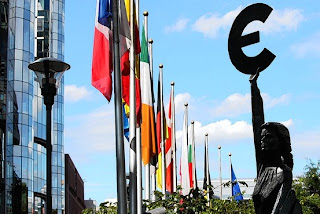 A dramatic selloff in European financial markets on Thursday renewed fears that Europe's banks are too weak to withstand the Continent's debt crisis, increasing the chances that the region's leaders will be forced to pursue radical steps toward fiscal union in order to preserve their common currency.

For more than a year and a half, the euro zone's strategy has been to buy time for its weak nations to regain the confidence of financial markets, while taking tentative steps toward closer cooperation on the bloated budgets that got them in trouble.

That strategy was on full display on Tuesday in Paris, where the leaders of Germany and France presented the latest in a series of initiatives aimed at bolstering the euro zone's architecture. Investors immediately criticized the plan, which included steps toward tax harmonization and stricter budget controls, as inadequate.

The Franco-German proposals, critics complained, laid bare the political inertia within the euro zone that has allowed the crisis to fester for months.

More
Posted by Yulie Foka-Kavalieraki at 10:32 AM