Profligacy is not the problem 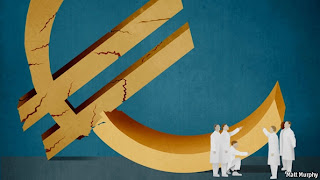 Misdiagnosis is not, in itself, malpractice. Everyone, be they doctors or central bankers or politicians, makes mistakes. But when the misdiagnosis involves ignoring some symptoms and persisting in treatments that aren’t working, it is not so easily excused. And that is what is going on with the euro, where a stress on demanding austerity has eclipsed the need to boost confidence.

Germany, the European Central Bank (ECB) and many others diagnose today’s mess as stemming primarily from profligacy on the periphery. “It is an indisputable fact”, Wolfgang Schäuble, Germany’s finance minister, recently wrote in the Financial Times, that “excessive state spending has led to unsustainable levels of debt and deficits that now threaten our economic welfare.”

If profligacy is the problem, the argument goes, austerity is the solution, with public thrift serving to rebuild investor confidence. The leaders of the euro’s core countries have demanded draconian budget cuts as the price of rescue loans to troubled economies. They have pressed the Italian and Spanish governments to tighten more and faster. And they plan more deficit reduction themselves. The ECB has cheered this on and pushed it further. In August it demanded a toughening of Italy’s austerity budget before it would step in to buy Italian bonds.

This medicine is harsh. Output has plunged more than expected in “rescued” countries such as Greece and Portugal, with growth prospects weakening, which drives the costs of debt up further. And it is not solving the problem. Confidence in the Italian and Spanish economies is evaporating even as their governments accelerate the cuts. The rot is spreading. Fears have risen about Belgium, even France. The crisis is clearly getting worse rather than better.

More
Posted by Yulie Foka-Kavalieraki at 10:30 AM