Next Game Under Way in Euro-Zone Crisis 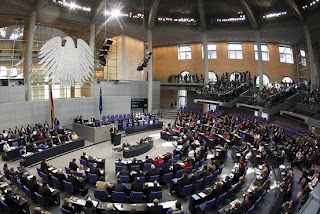 Germans like to compare life to soccer. And a common phrase heard everywhere from the beer garden to the Bundestag is “after the game is before the game.” As German parliament sits down today to vote on a reform bill that will give the euro-zone’s bailout fund more teeth and greater lending power, a long, tense competition over how best to resolve the euro-zone debt crisis comes to an end.

On one side are those like Ms. Merkel and her allies, who appear to believe that the route to saving the euro, the European idea, and Germany’s banking system, lies in rescuing Athens from drowning in a sea of debt. On the other side of the debate are pro-European deputies who say the bailouts violate the Maastricht Treaty on monetary union and fear that the consequences of throwing good money after bad will be born by generations of Germans and Europeans not yet born.

My colleague Vanessa Fuhrmans writes in a Wall Street Journal piece about Wolfgang Bosbach, a prominent pro-European conservative deputy and bailout critic, that although “Germans continue to feel a strong, historical commitment to Europe, with a common currency as its anchor, many have grown doubtful of whether it’s worth the ever-growing cost of saving the euro.”

More
Posted by Yulie Foka-Kavalieraki at 8:43 AM