Moving On From Greece? 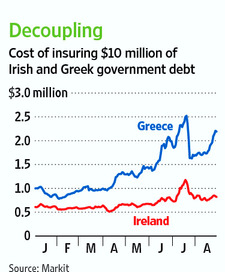 Will what happens in Greece, finally stay in Greece?

A host of doubts still surround the second bailout for the country. The economy is in tatters, there is doubt over the bond swap at the heart of the deal, and a spat over collateral for Finnish loans is continuing. But while Greek bond yields have surged to fresh highs, with the yield to maturity on two-year notes at 46%, the rest of the euro-zone government-bond market hasn't taken fright. That marks a step forward in the crisis.

The Finnish collateral spat is another example of the euro zone's challenge in sorting out the detail for its crisis response and bringing all 17 member states together. It may yet become another deeply divisive problem, even though officials are working on a solution and Finland has said it can be flexible on the form of collateral.

Meanwhile, the news from Greece itself has been bad. The Finance Ministry now projects the economy will shrink 4.5%-5.3% in 2011, versus a prior forecast of 3.9%. The deficit may fall only to 8%-8.5% of GDP versus a target of 7.6%. And it isn't clear that the latest bailout will stave off an ultimate default, given that it doesn't reduce debt materially.