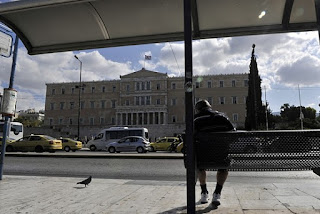 Speaking ahead of a dinner meeting with her Greek counterpart, Ms. Merkel—who faces a crucial vote in parliament on Thursday over the expansion of the euro-zone bailout fund known as the European Financial Stability Facility—said Germany was prepared to provide Greece "every assistance" to stabilize its economy.

She also said it was Greece's responsibility to carry out the fiscal policy and structural reforms recommended by the so-called troika: the European Commission, International Monetary Fund and the European Central Bank.

"In everything that we do, we follow the advice of the troika," Ms. Merkel said at a briefing with Mr. Papandreou. "We want a strong Greece in the euro zone."