Merkel enjoys triumph in bailout vote, but how long will it last? 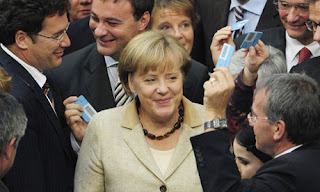 Victory for Angela Merkel in the crunch parliamentary vote on increasing the powers of the euro bailout mechanism could prove shortlived as Germany comes under increasing pressure from EU officials to deliver fresh proposals to give the rescue fund a supercharged boost.

German public opinion is firmly against any "leveraging" of the European Financial Stability Facility and both Wolfgang Schäuble, the German finance minister, and Philipp Rösler, the economics minister, set their stalls out against any such extension as the Bundestag voted 523 to 85 to increase the EFSF's available funds to €440bn (£382bn). The vote approves the increase of Germany's guarantees from €123bn to €211bn. Schäuble said any further increase, mooted after last weekend's IMF meeting in Washington, was "out of the question".

Behind the scenes, however, officials are discussing at least three options for leveraging the fund to help head off the threat of potentially catastrophic defaults across the eurozone and these talks are expected to accelerate now that Germany has approved the 21 July decision to give the EFSF enhanced powers.