Last Chance to Save the Euro

The European debt discussions always paint the alternatives as either bail out countries (really, bail out their bondholders) or break up the euro. In fact, the euro and the European economic union would be stronger if countries can default. For that reason, I advocated letting Greece go a year and a half ago when the crisis first erupted.

That chance to save the euro is fading. The European Central Bank (ECB) has bought sovereign debt from Greece, Portugal, Ireland, Italy and Spain. It has lent even more money to banks whose main asset is the same sovereign debt. Deposits are fleeing those countries' banks, and lending from the ECB is making up the difference.

Bank regulation is making the situation worse: Banks carry most of the ECB and sovereign debt at face value. And their own governments are pressuring banks to buy more sovereign debt.

When the defaults come, the ECB will take a big hit. Then Germany and the others will be faced with an awful choice: Pony up trillions to "recapitalize" the central bank or abandon the euro along with the union it represents.

"Eurobonds" that would be issued to buy sovereign debt, backed by EU-wide taxes, have been suggested but aren't going anywhere in the face of taxpayer resistance. In reality, Eurobonds have already been issued—they are called euros. The countries of the European Union are already pledged to make up any capital loss of the European Central Bank, and this must eventually come from tax revenues. That's the same as paying off Eurobonds. 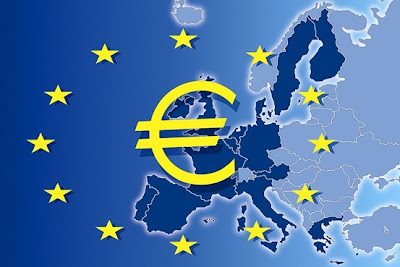 Posted by Yulie Foka-Kavalieraki at 9:30 AM