Keep the fire burning: Why Germany seems not to want a quick fix for the euro crisis 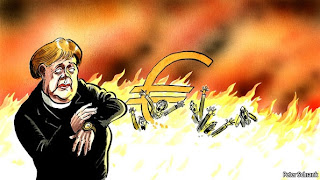 To hear Germany say no to fiscal stimulus, no to boosting the euro zone’s rescue fund, no to joint Eurobonds, one begins to wonder: does it really want to resolve the euro zone’s crisis? Of course we do, most Germans would reply. Is not the chancellor, Angela Merkel, the first to declare that “if the euro fails, Europe will fail”? Is Germany not the main provider of rescue loans to Greece, Ireland and Portugal?

All this is true. Yet Mrs Merkel seems to lack a sense of urgency. Despite the world’s calls for action, she does not believe in bold strokes—be it letting Greece default, or issuing Eurobonds to mutualise governments’ debt. Only a slow, step-by-step approach will work. In other words, the pain, austerity and market turmoil will go on for the foreseeable future.

German politicians are constrained by a complex federal system, a sceptical public, messy coalition politics and jealous institutions such as the constitutional court. Mrs Merkel struggled to persuade members of her squabbling coalition to vote for an expansion of the euro zone’s bail-out fund in parliament this week. But listen carefully to senior officials and the view is that not only is it impossible to stop the crisis quickly, but trying to do so is harmful. Eurobonds may provide relief in the short term, they say, but this would divert effort from the real cure of reforming public finances and uncompetitive economies; the illness might then re-emerge in more virulent form.

More
Posted by Yulie Foka-Kavalieraki at 8:10 AM