Is the New Euro Backstop Fund Just the Beginning? 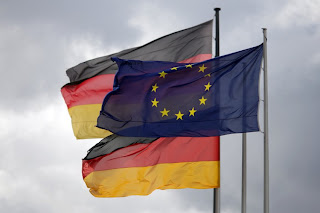 Markets are convinced that Europe is preparing to massively increase the reach of the euro backstop fund known as the EFSF. But politicians have been just as quick to deny it. What is going on? Even before the EFSF is approved, it would appear that additional steps are under consideration.

Who is one to believe these days? On the one hand, there are the global stock markets which have been surprisingly buoyant this week. Analysts are insisting that the positive mood is the result of renewed efforts in Europe to solve its ongoing debt crisis, with some reports indicating that European leaders are considering expanding the euro backstop fund and others saying that the fund could be leveraged to the tune of €2 trillion ($2.72 trillion).

On Tuesday alone, share prices for French banks BNP Paribas and Societe Generale, both of which are highly exposed to Greek and Italian debt, rose by 16.8 percent and 14.2 percent respectively. Risk premiums on Italian bonds, which have been steadily rising this year, have fallen back.

On the other hand, though, Europe's politicians are denying that any grand plan -- beyond the ongoing ratification of the €440 European Financial Stability Facility -- is afoot. German Finance Minister Wolfgang Schäuble said on Tuesday that an expansion of the EFSF beyond €440 billion isn't planned, adding that "a lot of nonsense" comes from Brussels. In separate comments, he called the idea "stupid" due to the pressure it could put on Germany's AAA debt rating.

What is clear, as became apparent over the weekend, is that Europe has come to realize that -- with the futures of several banks likely hanging in the balance should Greece topple, and the threat of contagion spreading elsewhere as a result -- the EFSF as currently constituted is insufficient. And the idea of leveraging the fund, by using its assets as collateral to borrow tens of billions more, would seem to be gaining support.