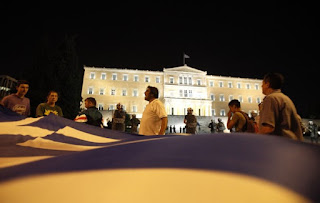 As a financial crisis spread through Asia in the late 1990s, the International Monetary Fund prescribed some harsh medicine for countries such as Indonesia and South Korea. Private banks took losses, and there were dozens of bank closures, nationalizations and mergers.

But now that Europe faces a crisis, the approach has been different. The IMF and others have tried to ensure that banks and insurance companies get repaid for their numerous loans to indebted countries such as Greece, Portugal and Ireland.

The slow pace of confronting problems involving hundreds of billions of dollars in government loans that may or may not be worth their face value has been blamed for dragging out the crisis, and has drawn complaints of a double-standard from Asian officials.

Kaushik Basu, an Indian economist, said the IMF’s approach to the crisis buffeting Europe is “not quite what it would be for an emerging country getting into trouble.” Basu, who is vice chairman of a group that represents major emerging nations and advises the IMF, added that in “similar situations you take similar stands, and we are not quite there.”

More
Posted by Yulie Foka-Kavalieraki at 9:15 AM